The transit authority in Greater Cleveland had a problem with lost and stolen keys to the fare boxes on their buses. A review of the collection reports indicated that a significant amount of money, mostly bills, was not making it to the bank. Although there was no way to detect if these missing keys were being used to raid the fare boxes, their absence provided a wide hole in loss prevention efforts. Rekeying the boxes with conventional locks might provide a temporary fix to the problem, but that would only last until the next key was misplaced or stolen.

The real dilemma was determining if the losses were a result of missing keys, or if issued keys were being used to breach the fare boxes.

A taskforce was formed to look at fare box security. The taskforce’s primary concern was the ease with which a conventional key could be duplicated. It was also discovered that a fare box could be rigged to appear locked, but, when using the right technique, it could be “popped” open and then closed without any visible signs of entry.

The taskforce investigated the CyberLock system, and found it addressed all of their concerns. The battery-powered key remembered what locks had been opened, and when. The lock, in turn, stored the same information, providing a check and balance. Further, the system provided the ability to regulate when the lock could or could not be opened, and by whom. If a key was lost or stolen, the locks could be told to refuse access to the key.

The immediate benefits were readily apparent. There was a marked improvement in the bill to coin collection ratio. Employee accountability improved as supervisors can now track how much time is being spent on each repair. Spot inspections by the Transit Police Department have found no incidences of unauthorized access with the CyberLock system.

Click here to learn more about CyberLock applications for the Transportation industry. 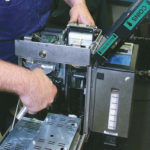 "The bottom line is that the collected revenue ratio has increased and employee productivity has improved. The CyberLock system works for us at the Greater Cleveland Regional Transit Authority."