Hoodview Vending is an independent vending operation located in the Portland, Oregon area. Bob Hill, owner, is an active member of NAVA (Northwest Vending Association) and owns hundreds of vending machines in locations throughout the metropolitan area. Hoodview was experiencing external loss from many of their machines due to unauthorized key duplication. Thieves are able to purchase key blanks from a variety of sources such as the Internet. They then make duplicates to gain access to the machines–and the money.

Hoodview Vending heard about the CyberLock system at a NAVA security conference and saw that this could be their solution. The CyberKeys cannot be duplicated. After a short field test, they ordered the CyberLock T-handle cylinders and went to work installing them in the most “at risk” machines. They found that some areas already had high security due to cameras or other deterrents. Therefore, Hill says that they installed the CyberLocks in vulnerable spots, “places where people have easy access such as schools and hospitals.” The results were outstanding. Hill states, “CyberLock eliminated our losses due to unauthorized key duplication; the system paid for itself in 60 days.”

Hoodview has found that their CyberLock system has other advantages and uses as well. For example, it compliments the GPS systems on the trucks very well for driver accountability, time studies, and route efficiency. Also, they have recently begun using CyberLocks for other purposes starting with doors in their office complex. 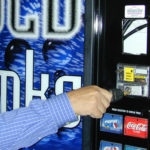 "CyberLock eliminated our losses due to unauthorized key duplication; the system quickly paid for itself."